Staring at the Sun

It’s a beautiful morning in Berlin. The sun is threatening to blind and my face is still cold from being outside. I walked down around the church, and I watched the dogs by the pond run across the meagre grass. I bought some oranges.

II. The Apparition of These Faces in a Crowd

I woke early this morning and read half of my daily prescribed canto of PARADISO. We’ve just landed on Mercury (!) and Justinian is explaining himself via the history of the Romans. I’m really happy I re-read THE AENEID last year, because I had forgotten so much of it. Now I know again very well the tragedy of Pallas and Aeneas' conflicted killing of Turnus. Would Rome had been lost if Turnus had been spared? Question the narrative!!

Dante is constantly blinded by splendor in PARADISO, and shades-becoming-lamps1 lose their facial features in the radiance, with the last remaining organ the eyes. I’m thinking about this blinding in contrast to the blinding that happens recurrently and violently in Greek tragedy, as an expression of despair. It makes sense that it’s the operational metaphor for the outer reaches of the matrix – where our understanding meets what is, in every case, the awful ineffable.

Dante repeatedly references his inability to remember what transpires in the heavens and the full splendor of PARADISO, often in conjunction with being blinded. The sun burns out the memory, along with the retinae.

Per Hollander: “There is (mainly unexpressed) disagreement among the commentators as to whether the memory is with the intellect in its first experience of the Godhead and only loses that perception afterward, or, as Dante seems to be saying, is left behind at the outset in the intellect’s excitement. Whatever hypothesis one accepts, the result is the same, as the last verses of the poem will also announce: The vision of God cannot be contained in human memory; rather, we can only claim a memory of having had a memory, now lost.”

My favorite moment in PARADISO thus far comes after Beatrice answers Dante’s early questions with disdain. After dispatching with his questions (which were not asked outloud, but read, in his mind), she turns and stares directly into the sun, beatifically. Dante is suddenly able to stare into the sun too, though only through some complicated reflection of his sight through Beatrice’s gaze.2 And they ascend to the moon.3

As I write, the sun gets brighter in my living room, and obscures this screen, reminding me that I too am called… to practice YouTube pilates with my friend Nicole, the Australian.

III. Come In, I Heard a Voice, From Inside

I’ve been delighted recently by Santo and Johnny, particularly this record, and by this Robbie Basho record, particuarly this song, all by way of recommendation from my dear friend L.

IV. Which Way, The Portal?

I read Patricia Lockwood’s NO ONE IS TALKING ABOUT THIS this week. I genuinely enjoyed parts of the novel and found the central plot to be arresting. But I’m not sure about the contemporary, autofictional internet novel, even ones that refer to the internet not as internet but as portal. Like meeting the sun, processing trauma, and, well, most things, I think that It might be better approached from the side or via a system of mirrors.

Otherwise, I continue PARADISO and I’m now starting TIMAEUS to extend my Platonic Return having recently been Floored by PHAEDRUS, which I vow to write another post about someday soon.4

Yesterday evening was so spectacular, the clouds all around the nearby field filling the sky with whispy black against glowing blue-pink-yellow.

I intended to finish this post when I came back from an evening walk totally stunned by the splendor, which seemed appropriate given my morning writing. I wanted to follow the opening with some thoughts about transclusion-as-allusion, the Alexandrian footnote, and transclusion in web infrastructure + my ultimate plans for the design of this blog.

But instead of writing, I listened to an incredible cicada podcast that triggered an almost manic cicada episode – intense fantasies of becoming a cicada entomologist led me to descend into the deeper reaches of cicada memes. There aren’t that many at the moment, and I downloaded all that I could find – I’m curious how Brood X will be received by the internet and transform the cicada Discourse. More importantly, I found again Cicada 3301, which I had not considered since becoming committed to cicadas. It really… throws a considerable new Concept into my already crowded cicada concept map. There’s apparently a Cicada 3301 film being released in like 6 days? Lol. Can’t wait! 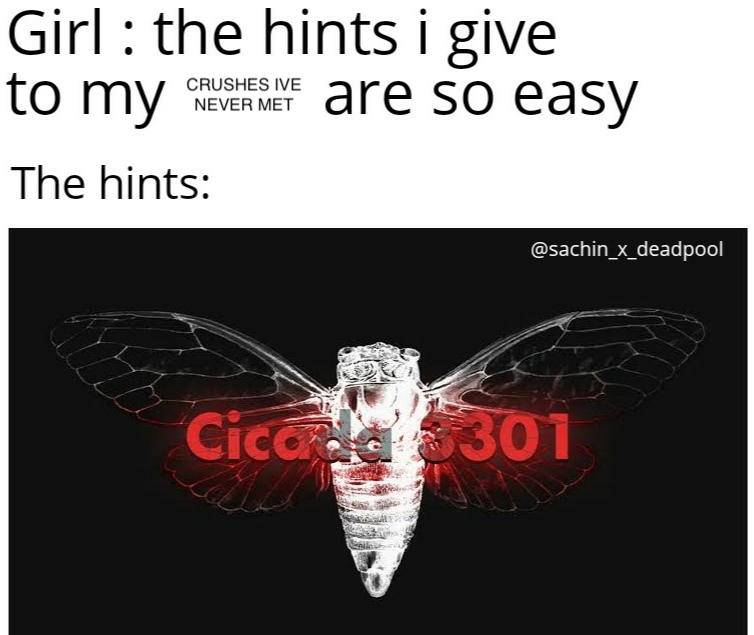 Along with everything else I’m doing this month,5 I’m trying to spread the cicada gospel. I think it’s working. Friends are now sending me lots of cicada content, and my aforementioned friend L. says she will mix some cicada songs from the mecca of cicadamania.com for her next radio show. So… you can’t say I’m not doing the good work in the service of the muses.6 I hope I’m rewarded. I keep thinking of the Merwin poem about being counseled by an older Berryman to get down on his knees and pray – literally kneel and pray – to the muses. I love that poem, especially its final lines: 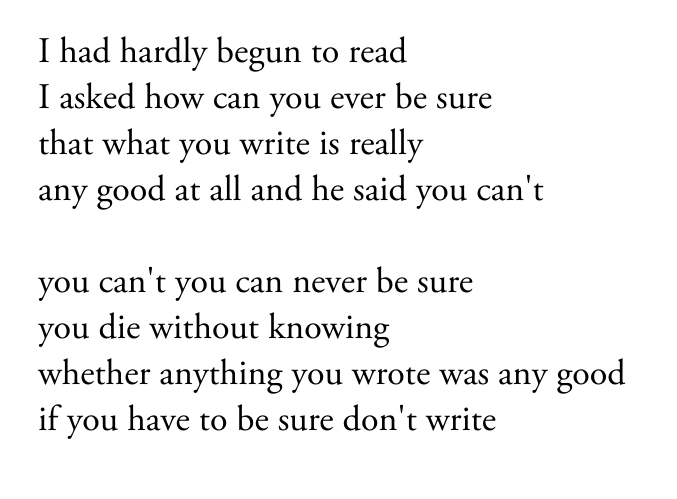 If you have to be sure, don’t write,