Dear reader, you will be thrilled to learn that as of this morning, I have read all 639 pages of Philip Hardie’s incredible RUMOUR AND RENOWN: REPRESENTATIONS OF FAMA IN WESTERN LITERATURE. 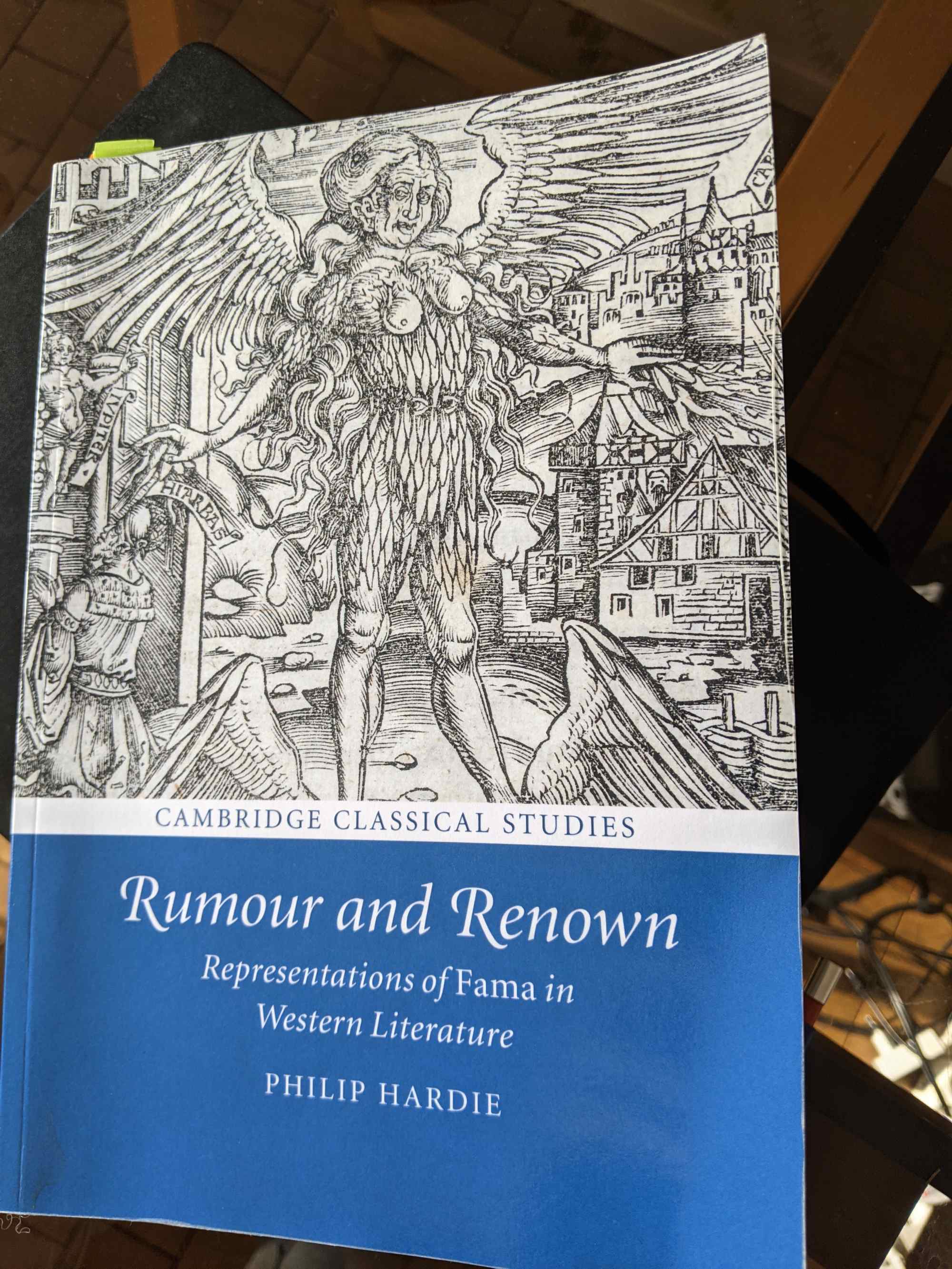 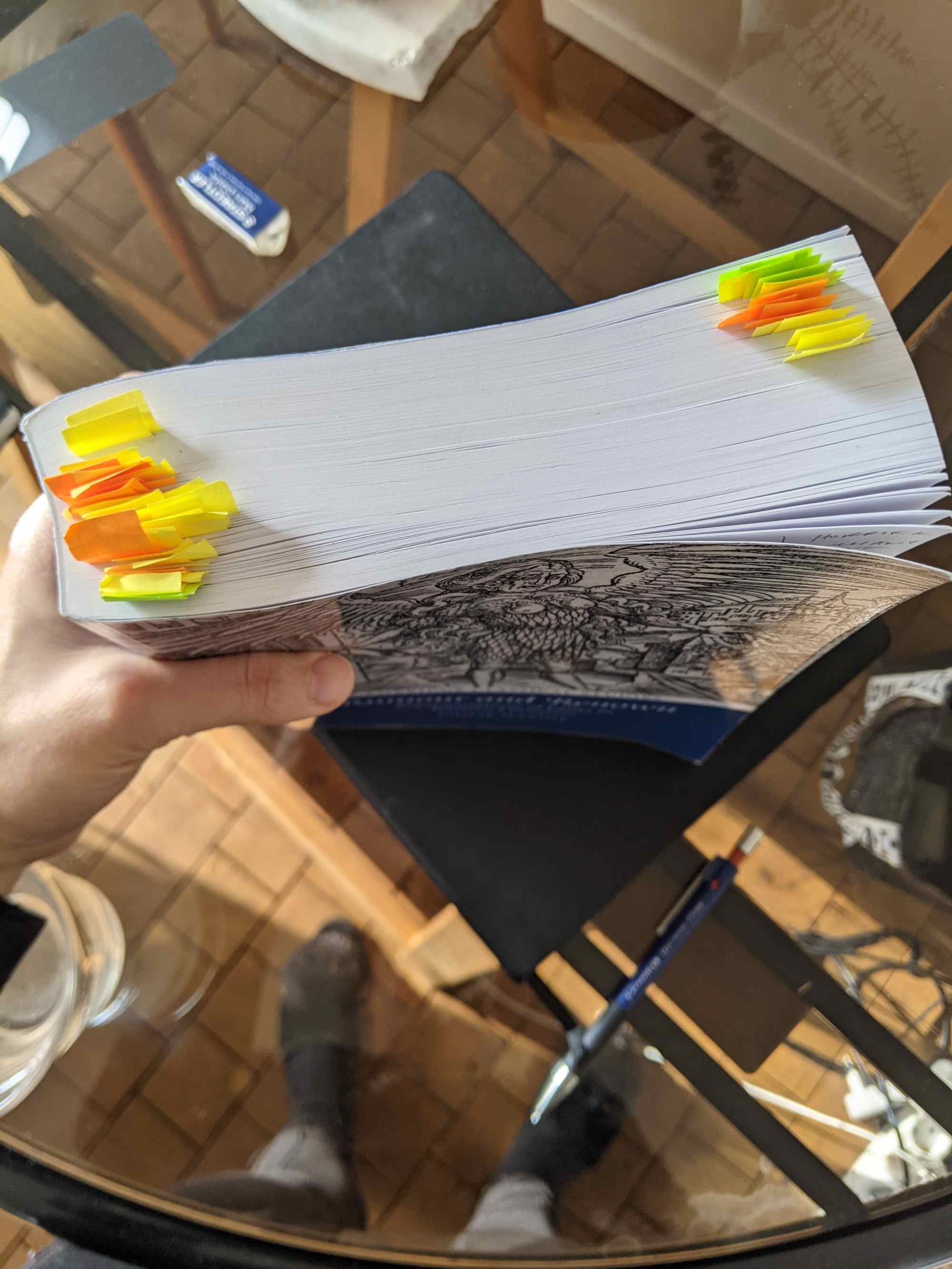 The cover image is a woodcut print of a “Virgilian” Fama, created in 1502 by Sebastian Brant for the Strassburg edition of Virgil. She is, aptly, covered in tongues as first described in The Aeneid.

Per Hardie: “Fama’s winged feet are reminiscent of the winged sandals of Mercury, for whom she is a demonic double… The demonology is as much Christian as pagan; this monstrous winged figure, with feathers covering her body, is an evil angel. This Fama is not in fact covered in eyes, but a point of convergence between Virgil’s Fama and the biblical tradition are the eyes that cover the bodies and wings of the cherubim (Ezek 10:12…), an iconography that is transferred to images of seraphim. The theological loyalties of Brant’s Fama are placed beyond doubt by her cloven hoofs. From her hands shoot forth flames, alluding to the wildfire rumour, and corresponding to the fiery, thunderbolt-like nature of the Virgilian Fama.” (R&R, p. 606)

This passage is a good example of the density of iconography that the book accretes and analyses.

(As side-note, I’ve been delighted, over the past months, with the seraphim memes and emojis, which do a little unconscious hat-tip to the iconographic lineage of Fama.) 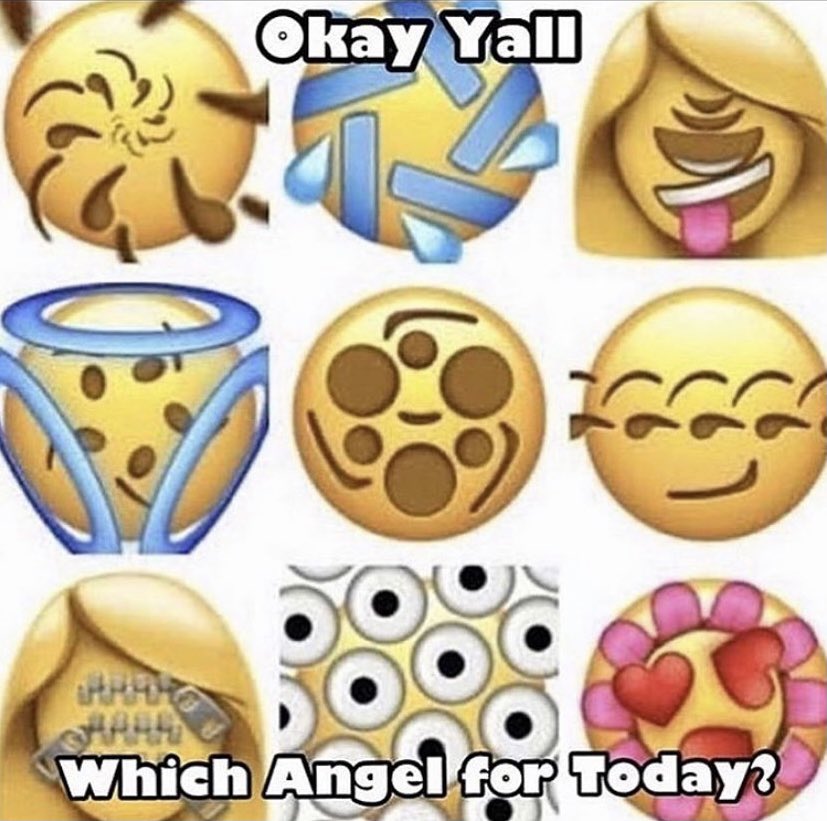 Fama sees many doublings. She is a double of Mercury (the messenger), of Argus Panoptes (who Mercury kills in order to extract the thousand eyes that cover his body), and of her many demonic / fury siblings and associates. (Technically, she’s the sister of the Titans, the final child of Earth, and Earth is Pissed.)

She also doubles herself: she is bona and mala fama, good and bad rumour, fame and infamy – as depicted at the top of this frontispiece: 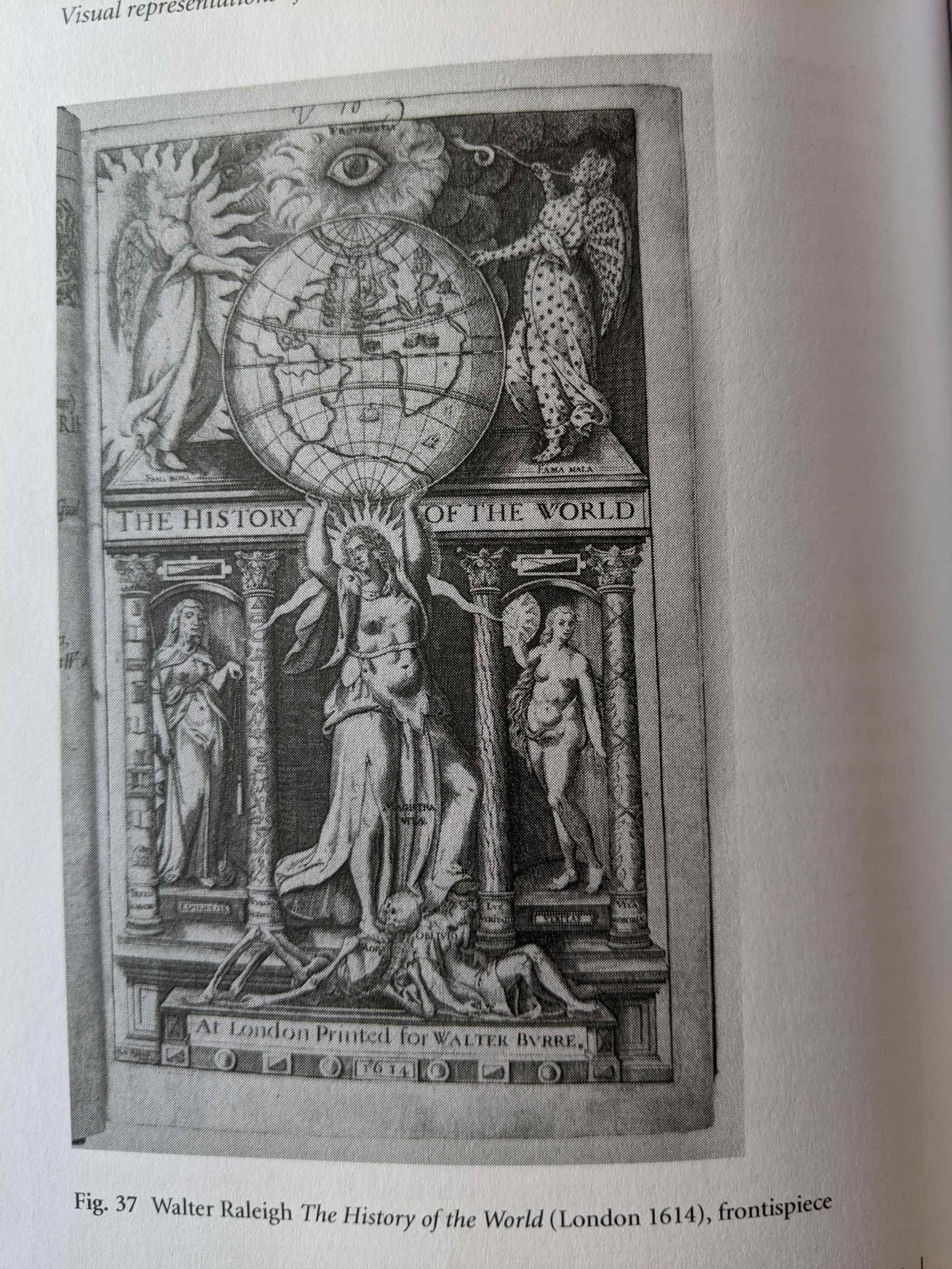 About this, Hardie writes: “Bona Fama is paired, or rather twinned, with Mala Fama, two winged and trumpet-blowing figures, exactly the same compositional type reversed. They are both versions of Virgilian Fama, but presented with accidentals that make of them a pair of opposites. Bona Fama has wings adorned with ears, eyes, and tongues, but is otherwise of spotless body and dress. Mala Fama is set amidst dark clouds, rather than bright light, and her whole body and dress are covered in spots, which are obviously derived from the eyes that frequently cover the person of Fama, but which Corbett and Lightbown describe as ‘spots… signfiying a spotted or blemished reputation…” (R&R, p. 637)

I love this image of Fama’s eyes / tongues / etc. as blemishes, because I experienced trypophobic revulsion the first time I saw an image of Argus Panoptes, and I am often triggered by images of Fama. Those gaping mouths and staring eyes are very sore-like, which is funny, because there’s a recurrent and associated image of open wounds becoming mouths, loaned the tongues of the crowd. (I think this comes first from Shakespeare but need to a fact check.)

(This gets even Weirder when you consider depictions of Jesus’ side wound as a mouth, which was a Thing through many centuries… but this really triggers my mania re: the Moravians so I’m going to save it for another day.)

Sometimes Fama is one figure, with one trumpet, but two mouths – one of bona fama, one of mala fama. Or sometimes one mouth, but two trumpets. Sometimes the trumpets are of silver and wood, representing the two types of fame – transitory and eternal. Likewise, in Chaucer’s feverdream of a poem, HOUSE OF FAME, which I can’t wait to read, Fama has two houses, one of stone – and one a malestrom of twigs.

To close for now, I randomly opened to a page for this post, which, quite aptly, is this passage: 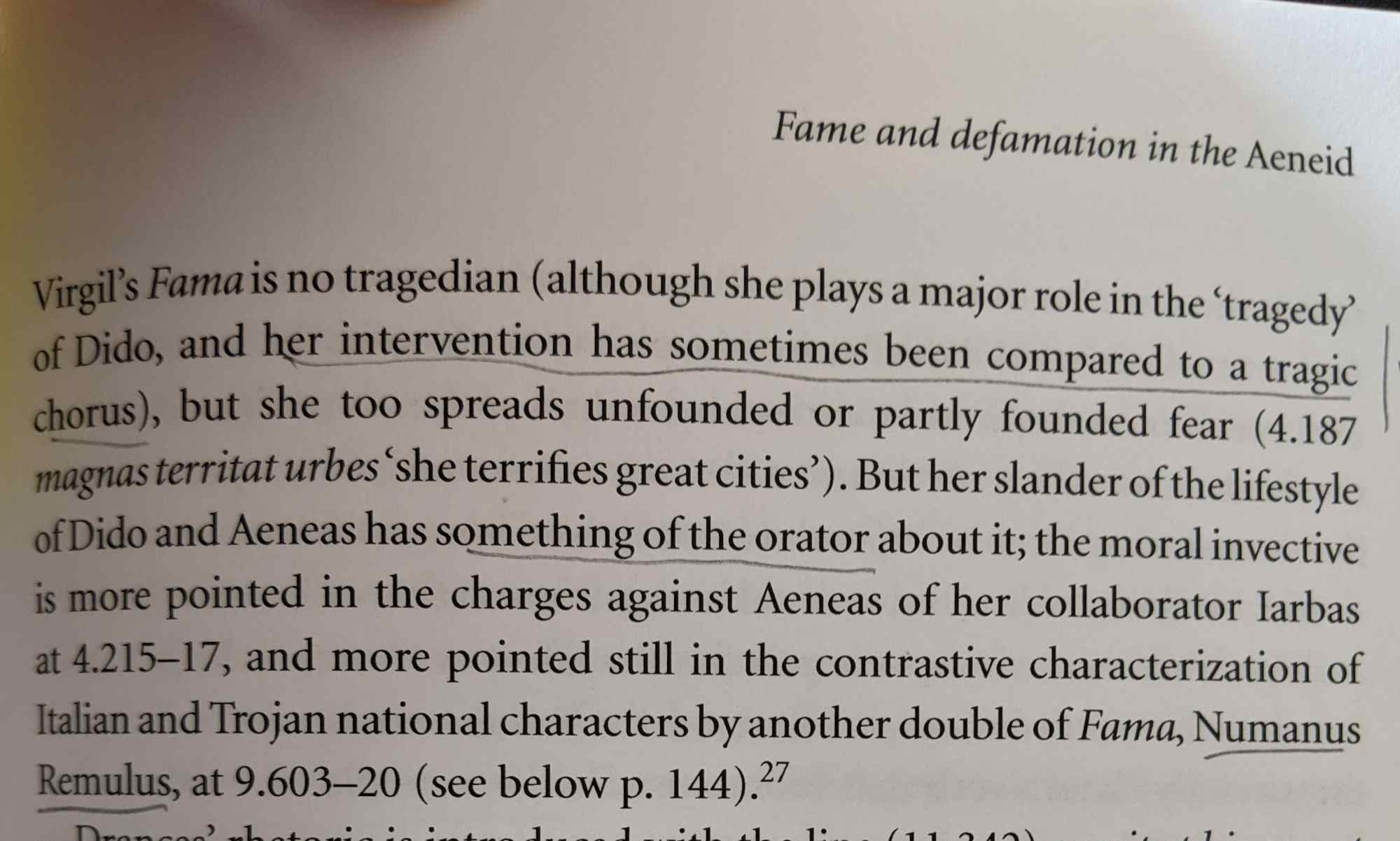 The functioning of Fama-as-chorus is fascinating to pair, structurally, with the first description of her home: a bronze sphere at the center of the earth that functions as a whispering gallery for all the world’s gossip (Ovid in Metamorphoses).

Over time, with her trumpets and her many tongues, Fama also becomes an orator, which for me, is particularly interesting given my on-going reading of Phaedrus for my cicada suites. The cicadas in Phaedrus, buzzing in the background of Socrates' speeches about rhetoric and love, can be seen as a chorus of gossips, or unceasing dialecticians. As every thesis carries an anti-thesis, all gossip carries truth and falsehood. The poet-becoming-orator is responsible for the framing.

This calls forth the point that Hardie makes – again and again – the poet is represented by Fama inside the poem, while at the same time the poet is an instrument of Fama outside the book, playing, always, on human mortality and the lure of a fame that will secure a life beyond life, a life in the stars. This poet-fama doubling is what gives us History, the depiction of which, as Hardie remarks, Fama closely resembles in Raleigh’s frontispiece above.

I still don’t have a handle on this conceptually, and I need to do much more writing in order to figure it out. I’m sure the transcription of notes will help as well, and I hope to write more posts about Rumour and Renown.

I’m also about to begin the Hollander translation of PARADISO, which I’m so excited about. For any Dante stans out there, I’m experiencing bi-weekly delight from Mark Scarbrough’s fantastically slow-moving podcast, “Walking with Dante” – I highly recommend it!

I released my first non-fungible tokens this week on Zora. It was very fun to bring together years of blockchain/crypto-adjacent whispers and angst. I continue to be entertained by the ringtone format, and it was also fun to sort through my old SHUSHTONES.

I think it’s good practice for me to release as much as possible, as I can get quite precious about my work (also the point of this blog). When I had my BCR show, it forced me to do something public every 2 weeks, and regularly braining yourself with the blunt instrument of the Shill eventually makes even the most sensitive among us numb to living in public, or, as it were, to bona and mala fama. Cheers.